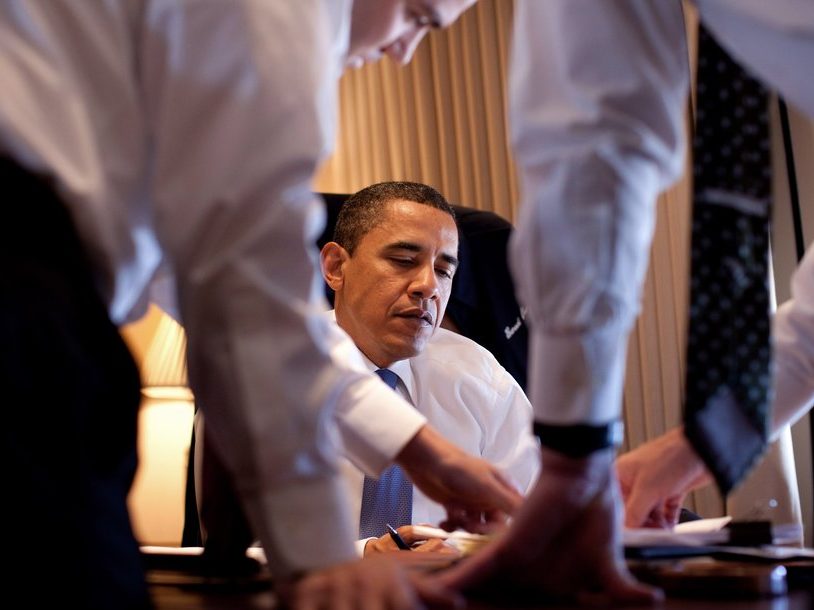 Many presidential candidates have declared their intention to reform American foreign policy. The positive response of voters toward such rhetoric has contributed to the victories of two recent presidents: Barack Obama and Donald Trump. We may not have a clear understanding of the Trump administration’s national security decision-making process for years. His initial foreign policy, more orthodox than expected, has now given way to a “Cheneyism,” as reflected by his new band of hardline advisers. Whether he’s favoring more hardline instincts or has been “captured” by the Washington foreign policy establishment, it’s worth examining the factors that constrain significant shifts in U.S. foreign policy.

The World As It Is, written by Ben Rhodes, a senior foreign policy figure during the Obama administration, provides a window through which to examine how Washington and the world responded to an American president seeking change. In most ways, Trump and Obama could not be more different. However, they both came into office critical of the Washington foreign policy establishment and generally skeptical of American military adventurism around the world.

Rhodes’ book is more of a memoir than national security decision-making literature. It is also a limited vantage point. But it is ultimately valuable for understanding how a president interested in redrafting American foreign policy convention on military restraint and human rights may be constrained. The constraint comes in the form of actors at three distinct levels: the bureaucracy of the Executive Branch, the Washington environment of media, think tanks, and Congress, and finally the other nations of the world. All of these are prone to seeing change in America’s foreign policy approach as either inconsistent with their ideology or interests.

For Rhodes, these factors mean that “American politics pushes military interventionism, even as public opinion is wary.” It is an extension of a post-9/11 dynamic that, to Rhodes’ anguish, the Iraq War had done nothing to change. Showing toughness was the primary goal even when divorced from any strategic guidance or legal basis. “Doing more was tough, anything else was weak,” he says, describing Washington’s outlook on the world.

Obama had come to Washington as an insurgent candidate with little familiarity with the country’s foreign policy machinery or the people who run it. Looking for party unity and continuity in security affairs, Obama retained Robert Gates as Secretary of Defense and named Hillary Clinton as Secretary of State. They, along with the liberal interventionists like Susan Rice and Samantha Power, provided Obama with a somewhat continuous flow of interventionist advice, whether in pursuit of maximizing American power or high-minded virtues like protecting civilians. Many of these advisers called on Obama to pursue a more muscular and interventionist U.S. posture on a wide set of issues, including greater Middle East conflicts like Syria and Afghanistan.

Rhodes identifies Power, who he at times speaks of almost as a mentor, as a fellow traveler trying to rewrite the rules of American foreign policy. But while Rhodes, Power, and Obama shared a belief that American humanitarian intervention can benefit the world, Obama was much more aware of the limits of American power than Rhodes and especially more than Power. In many ways, the book is about Rhodes and Obama making peace with what they can’t change, both in America’s foreign policy and the world. At several points, Rhodes recounts instances when he and Obama experienced rare cases of friction over issues like Syria. He usually associates these episodes with fatigue and stress, but can also see that Obama is reaching his realist endpoint faster than Rhodes, or perhaps, that he had a head start. In his 2016 book examining the foreign policy mindsets of Obama and Hillary Clinton, The New York Times’ Mark Landler attributes Obama’s relative caution in exercising American power to his years living abroad. To Landler, this experience in Obama’s youth showed him the limits of American power and its potential to do harm.

The members of the Executive Branch also had what Rhodes calls “antibodies” for when Obama sought any new direction—by either watering down the decision or tying his hands. Intelligence community staff would edit Obama’s speeches to change talking points on torture. During the Munich Conference, Hillary Clinton and the special envoy for Egypt Obama had appointed on her recommendation, tried to “undercut” Obama, in Rhodes’ words, by relaxing the demand that Mubarak resign.

During the Afghanistan review early on, the military’s senior brass used leaks through an “independent communications adviser” to threaten the president’s political standing and to “box Obama into sending more troops to Afghanistan.” If Obama didn’t give the military leadership what they wanted, the media would have announced him as being timid in the eyes of America’s fighting men and women. Every future act of restraint would have been viewed through that prism.

Washington: Lobbies, Media, and the Blob

The media is pictured as often overtaken with an imperative for American action on every acute global development. Lines of questioning seem to regularly boil down to: Why is America not at the center of these developments, shaping events and dictating terms? Rhodes recounts how this irritated Obama, who complained that the “press ignored the steady work of American leadership and legitimized every demand that he do more to escalate conflicts.”

In Rhodes’ telling, the governments of Saudi Arabia, the UAE, and Israel, coupled with their respective powerful lobbies in Washington, were in permanent campaign mode, constantly attacking Obama’s foreign policy as weak and ambivalent, and trying to undermine him at every turn. In regards to the Iran-related nuclear diplomacy, for example, Rhodes says “the Israeli and Gulf advocacy ensured a steady flood of well-funded commentary advocating a harsh stance against Iran and, ultimately, the Obama foreign policy.”

American politicians typically paint countries like Saudi Arabia and the UAE as distasteful but necessary allies whose rogue and often repulsive leaders must be engaged with, in a professional manner, out of deference to mutual interest. This is, in part, what makes Trump’s more fulsome embrace seem atypical. But in the Washington Rhodes describes, these Sheikhdoms and their agents are not treated in a manner businesslike or at arm’s length; they are themselves respected features of the landscape and are even treated as thought leaders.

Much has already been said and written about Rhodes’ aversion towards “the blob,” which roughly describes Washington’s think tanks, pressure groups, and foreign policy commentariat. Rhodes says the portrayal of his enmity towards them is overplayed, but suffice it to say, these tribunes of common wisdom are painted as a kind of shadow government, shaping both elites and common U.S. opinion about the administration from a critical and hawkish standpoint.

One might expect Congress to be a source of pressure towards more U.S. activism around the world. But, in Rhodes’ telling, Republicans in Congress cynically parrot claims about Obama being weak or indecisive only to end up “tying themselves in knots,” triangulating to oppose action when politically convenient—such as when Obama requested a congressional mandate for military action against Syria. Rhodes considers them to have been “focused on creating a political trap” and partisan point-scoring, rather than being guided by any specific political ethos.

The World: America’s Allies and Enemies

The third constraint should be more familiar to the readers of this publication. Countries around the world and U.S. allies especially, often resist significant change in U.S. policy or in the status of their alliance with Washington. Netanyahu’s inflexibility on Palestine, the corrupt and autocratic behavior of many of America’s Arab allies, “revanchist” Russia and Chinese ambition thwarted many aspects of Obama’s goals on foreign affairs.

The interplay of these forces is especially worth examining. The cooperation of actors from different levels can be deeply impactful. As mentioned above, executive branch officials used leaks to like-minded media figures to manipulate how the president’s decisions affected his political standing with the public. Foreign dictators, struggling to hold power, lobbied the president for support leveraging military-to-military relationships.

America’s Middle Eastern allies—Israel, Saudi Arabia, and the UAE—seem especially significant, as they exert influence on all three levels. They influence U.S. policy through military and diplomatic ties, potent lobbying operations and congressional relationships, and of course, they use their national capabilities to shape events in the region.

The book also reminds us that any president’s political capital is limited, and that stark shifts in policy can be cost prohibitive while a president is taking on budget fights, congressional adversaries and unsettled domestic issues that are often more relevant to success in American politics. “I just wish I had more bandwidth,” Rhodes quotes Obama as having said during a conversation about the Arab Spring, while he was grappling with a debt-ceiling fight and a reelection campaign.

It should be said, however, that this is not a perfect test case for assessing restraints on a president’s impulse to buck inertia. Obama is not reflexively restrained, and those influential enough to impact him are not predictably hawkish at every encounter. Libya is the obvious example, where Obama ordered action despite the military’s disapproval. It should also be noted that regardless of potency, the efforts of the actors described above can be thwarted by the president’s own stubbornness. But one should consider that challenging these forces can come at a cost to a politician’s political capital. Obama, ultimately, did not see a viable military option in Syria and declined many of the more aggressive military options. But in doing so he paid a heavy political price.

Rhodes is very aware of Washington’s ability to distort Obama’s foreign policy, but there is little done to address it. There is rarely any effort made to engage the American people, the bully pulpit is only occasionally used to outline any overarching vision, the heavy-handed foreign influencers are never confronted, and think tanks and media are approached episodically with no comprehensive effort to manage their expectations and assumptions. Obama also failed to tap into a pool of intellectuals that have long been advocating a more limited American foreign policy and have developed a broad range of strategies and theories on how a more limited U.S. posture can be more effective in achieving America’s core interests around the world.

Any president seeking to re-shape foreign policy would need to learn from the crippling obstacles faced by the Obama administration. The grand strategy of presidential action would need to counteract and limit each of the three levels of restraint. Moreover, the first and third levels are highly dependent on the second. Staffers often come from—and go on to work in—the network of think tanks, lobby groups. Foreign advocacy organizations and foreign governments make extensive use of them to gain contacts and supporters in government, media, and academia. A top-level solution would entail coordination between the executive and legislative branches to limit the negative consequences of this revolving door, perhaps by barring certain areas of private sector work by former officials or retaining some kind of official status dependent on public accountability, should they choose to do so. The network of foundations and their donors are also increasingly under scrutiny by political authorities across the world, whether it be Chinese-funded institutes on American campuses or U.S.-backed universities in Hungary. The long-term goal with such policy tools is to limit the outsourcing of policy to unaccountable private actors and ensure the primary loyalty of political staff to the executive branch and its ends.

Ultimately, the first task which any president seeking to make structural changes to U.S. foreign policy must first think about is how to change the environment around him.

Alireza Ahmadi is a researcher and analyst focused on U.S. foreign policy. He has been published by The National Interest, The Hill, and Al-Monitor about American foreign policy towards the Middle East. You can follow him on Twitter at @AliAhmadi_Iran.